The Worst Day Of A CEO’s Corporate Life

A CEO’s Day Of Infamy
- An “Inter-Agency” Task Force of CID, AFOSI, DODIG, and NASA IG is in the lobby.
- They have a search warrant and plan to confiscate every hard drive in the company
- They have asked for your cooperation to interview employees
- The local newspaper and TV station have reporters on the scene
- You are only topically aware of the alleged wrongdoing

"An Alabama company and its owner have been indicted by a Federal Grand Jury on charges of illegally exporting military defense technology without a license, fraud involving aircraft parts, and submitting false documents. The five-count indictment charges are for AXION CORPORATION and its owner ALEXANDER NOOREDIN LATIFI, 59.

A CEO’s Day Of Infamy
The Three Most Likely Cause:
- Disgruntled employees
-Employee bad judgment
-Ignorance

Disgruntled Employee Example #2
-Successful Huntsville 8(a) Company
-Largest contract was a subcontract with a
top five government contractor
-Disgruntled employee claimed 8(a) had submitted false claims
-8(a) retained a retired SES attorney to conduct investigation
-Because of excellent “damage control,” no adverse impact

Bad Judgment Example #2
-In 2002, Boeing’s CFO offered a job to Darleen Druyun, the Air Force chief acquisition official.
-For a reduced sentence, Druyun admitted that she favored Boeing on multiple contracts because of favors granted by Boeing.
-Boeing’s CEO was forced to resign
-Contracts awarded to Boeing by Druyun were successfully protested
-Boeing’s recent loss of the Air Force tanker program is largely
attributable to the scandal

Bad Judgment = Bad Ethics
“I also went back and counted the number of vice presidents who have been separated from the company for ethics
violations over the last few years. The total is 15.”
Boeing General Counsel (2006)

Ignorance Example #2
-In 1995, Coast Janitorial Service was awarded a contract at Redstone Arsenal for $19,128,277
-Coast’s Project Manager, “to keep overhead low,” did not pay employees who worked overtime time and a half
-Instead, Coast credited employee with “comp time” which was paid at regular hourly rates.
-DOL found SCA violation involving
two employees at an amount of $6,596.
-Coastal responsible for “willful and deliberate” violations of supervisor
-Coast debarred for 3 years
-President, Mr. Grimes, debarred
-VP, Mr. Scott, debarred

I. Prevent
The best precaution is an exceptional compliance program.

Compliance Program
-Prevent and detect improper conduct.
-Promote an organizational culture that encourages the highest degree of honesty and integrity, ethical conduct, and a commitment to compliance with the law.
-Facilitate timely discovery and disclosure of improper conduct.
-Ensures corrective measures are promptly instituted
-Tailored to the size of the organization and its involvement in government contracts

Within 30 days of contract award the Contractor shall:
-Have a written code of business ethics and conduct; and
-Provide a copy of the code to each employee engaged in performance of the contract

Ninety days after contract award, a large business must have:
-an ongoing business ethics and business conduct training program
-an internal control system

Board Of Directors
Gabig’s Recommendation:
Any corporation that derives the majority of its revenue from government contracts should have a Compliance Committee (not unlike it has an Audit Committee and a Compensation Committee).


II. Prepare
1. Make “the day of infamy” and related decisions an off- site discussion topic
2. Lawyers are the equivalent to “emergency responders”
3. Review insurance coverage and decide what is appropriate
4. Review indemnity in employment contracts and bylaws

Concluding Thought
Occupational Hazard – When you do business with the Sovereign, you risk incurring the Sovereign’s wrath.
Treat like any any occupational
hazard:
1. Prevent
2. Prepare 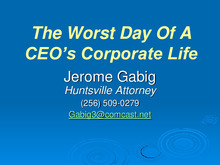