I. Growth In Federal Acquisition Of Services
Growth In Spending
“Contracting for services increased by 17% per year between 2000 and 2008.”
Dan Gordon
OFPP Administrator
Federal Computer Week, Feb. 3, 2011

Growth In Spending
“The federal government spends about $320 billion a year on contract for services.”
New York Times
Sept 12, 2011

Schooner ‘14 Review
“We have been aware, for some time, that services dominate the defense procurement landscape, and that has not dramatically changed. *** After peeking in 2008, products declined faster than services.”

SCA Fundamental
Applies to every federal contract that exceeds $2,500 when the principal purpose is to furnish services to the government through the use of service employees in the US, Puerto Rico, Virgin Islands, and certain South Pacific Islands

SCA Fundamental
“Service employee” means any person engaged in the performance of this contract other than any person employed in a bona fide executive, administrative, or professional capacity …. It includes all such persons regardless of any contractual relationship that may be alleged to exist between a Contractor or subcontractor and such persons.
FAR §52.222-41(a)

SCA Fundamental
Subcontractors as “service employees”
“A person's status as an ‘owner-operator’ or an ‘independent contractor’ is immaterial in determining coverage under the Act and all such persons performing the work of service employees must be compensated in accordance with the Act's requirements.”
29 CFR §4.155

SCA Fundamental
•Service contractors are required to pay their laborers time-and-a-half for all hours in excess of 40 hours per week
•If employee is exempt from SCA, overtime rules do not apply (e.g., IT professionals)

III. The Anatomy Of A WD
The Anatomy Of A WD
A WD consisting of:
•The minimum wage expressed as an hourly wage rate for each class of service employee
•vacation and holiday benefits prevailing in the locality
•A H&W fringe benefit rate

The Anatomy Of A WD
•Only a fringe benefit if the contractor is contractually obligated to provide
–Discretionary bonuses not included
•Vacations & Holidays separately reported
–Holidays are usually 10 standard federal holidays
–Typically 2 weeks vacation accrue after 1 year of continuous employment.

The Anatomy Of A WD
Tri-County ContractorsARB 11-014
•In 2006, Tri-County awarded contract for mobile homes to assist Hurricane Katrina victims.
•SCA WR was $9.68 for laborers and $2.56in benefits
•Tri-County paid $15.00 an hour flat rate.
•No mention of benefits on pay stub
•Based on 2006 audit, DOL required payment of an additional $2.56 an hour

Collective Bargaining Agreements
If an activity competes a new contract for substantially the same services and the contract is to be performed in the same locality, the successor contractor must pay wages and fringe benefits at least equal to those contained in the CBA effective under the previous contract.

Collective Bargaining Agreements
•CBAs have priority, even if benefits are less than WD
•Contractor may renegotiate CBA after base year
•Can be successfully challenged if
–not an “arm’s length transaction”
–"substantially at variance" with rates prevailing in the locality for similar services.

No Wage Determination?
If no WD and no CBA, must pay “the minimum wage set forth in the Fair Labor Standards Act.”
FAR §22.1002-2

DOL WDs … Reviews
•Any interested party may request a modification of a WD from the Wage & Hour Administrator
•Interested parties include any contractor, employee, labor organization, Federal agency, or other party with a relationship to contract
•If the Administrator denies the request, that party may appeal a WD to the Board of Service Contract Appeals

Executive
•Supervises two or more full-time employees
•Primary duty is the management of the enterprise
•Must be salaried; no deductions for most absences
•Must have role in hiring and firing of subordinates

IT Professional
•No academic degree; a combination of education, training, and experience is satisfactory
•Expressly excluded are those employees engaged in the operation of computers (key entry occupations) or in the repair or maintenance of "ADP" (automatic data processing) hardware and related equipment

IT Professional
Primary duties must include:
1. the application of systems analysis including consulting with users to determine hardware, software or system functional specifications; or
2. the design, development, documentation, analysis, creation, testing, or modification of computer systems or programs; or
3. the design, documentation, testing, creation or modification of computer programs

Commercial Exemption
Contracts principally for the maintenance, calibration, and/or repair of:
•ADPE and office information processing systems
•Scientific equipment and medical apparatus or equipment
•Other office/business machines where such services are performed by the manufacturer or supplier

Commercial Exemption
(A) Commercial items must be used regularly for other than Government purposes, and are sold or traded by in substantial quantities to the general public;
(B) The prime contract or subcontract services are furnished at prices which are, or are based on, established catalog or market prices for the maintenance, calibration, and/or repair of commercial items.
Commercial Exemption
(C) The contractor utilizes the same compensation plan regardless if the employees are performing work for the government or for commercial customers.
(D) The contractor certifies to (A), (B) & (C).

Commercial Exemption Expanded
In Feb. 2009 the FAR was amended to exempt commercial services performed by employees that individually spend 80% of their time on commercial work.
FAR §22.1003-4(d)

GSA Schedules?
“The appropriate SCA wage rates are supposed to be included in the order per the GSA ordering instructions.”
http://www.wifcon.com/discus/messages/5/390.html?1077596540

Using SCA To Game Price Proposal
Awardee for linguists services did not escalate its price proposal for the option years in anticipation of increases if SCA wage determinations. Other offerors' proposals included escalating prices for the option years.
SOS Interpreting, LTD, B-293026, Jan. 20, 2004
V. Post-Award Execution
DOL Mistake In WD
DOL may require that its mistake be corrected retroactively. The CO must equitably adjust the contract price to reflect any changes in the costs of performance as a result of incorporating the new WD

Non-Displacement of Qualified Workers Under SCA (E.O. 13495)
•Contractors must offer a predecessor's employees a right of first refusal of continued employment if a follow-on contract will continue the same work at the same location.
•A contractor must make a “good faith” offer to non-managerial and non-supervisory employees whose employment would be terminated as a result of an award of a successor contract for “positions for which they are qualified.”

Non-Displacement of Qualified Workers Under SCA (E.O. 13495)
•The contractor may determine the number of employees needed for efficient performance and may use fewer employees than the predecessor.
•The “good faith” offer must be express and provide a 10-day period for acceptance.

What Is The Authority That Required Increased Wages?
SCA?
Limits adjustment only to a contractor's actual increase in wage and fringe benefits costs
The Changes Clause?
Contractor entitlement to indirect costs and profit
W.G. Yates & Sons Constr. Co., CBCA 1495, Dec. 21, 2010
“Conformance”
•Where a WD omits a category of service employee, the contractor must classify the employee to derive an appropriate wage rate and fringe benefits using reasonable equivalent analysis
•DOL regulation states “a pay relationship should be maintained between job classifications based on the skill required and the duties performed”

“Conformance”
•Within 30 days of using category, contractor must submit a SF 1444 “Request for Authorization of Additional Classifications and Rates” to C.O.
•C.O. reviews and prepares recommendations to DOL
•DOL either approves, modifies, or disapproves rates within 30 days

“Conformance”
•If DOL increases wage rate or level of benefits, contractor must pay without an equitable adjustment
•Contractor has right to appeal to DOL Administrative Review Board

Notice To Employees
•Contractors and subs are required to notify each service employee of the compensation and fringe benefits in the WD
•Obligation can be satisfied by:
–Personal delivery of the notice to the employee
–Posting the notice in a prominent and accessible place

Price Adjustments
•Price adjustment includes only increased wages and fringe benefits
–Includes social security, unemployment taxes, and workers’ compensation
–Excludes increased G&A and O/H
•Price Adjustment clause requires contractor to warrant “that the prices in this contract do not include any allowance for any contingency to cover increased costs for which adjustment is provided under the clause”

Price Adjustment
A price adjustment is not available when the contractor voluntarily increases wages for reasons unrelated to a wage determination (i.e., retain quality employees or reward performance)

Record Keeping Requirements
“The records which a contractor or subcontractor is required to keep … are required to be maintained for 3 years from the completion of the work, and must be made available for inspection and transcription by authorized representatives of the Administrator.”
29 CFR §4.185

VII. The Perils Of Ignoring The SCA
Consequences of Violating
Topics of Separate Discussion
•Debarment
•Contract can be cancelled
•Contract payments can be withheld
•Individuals can be held responsible

Potential Debarment
•By statute, debarment for three years is mandatory unless DOL finds that "unusual circumstances" exists
•DOJ states the exception should be “exceptional” because the “legislative history leaves no doubt about the intended rarity of the exception.”

Debarment (continued)
Legislative History
According to Congressman O'Hara:
“Restoration * * * [of wages and benefits] is not in and of itself a penalty. The penalty for violation is the suspension from the right to bid on Government contracts”
29 CFR §4.188(b)(2)

Debarment (continued)
Coast Janitorial Service v. DOL
•In 1995, Coast was awarded a janitorial services contract at Redstone Arsenal for $19,128,277
•Coast’s Project Manager, “to keep overhead low,” did not pay employees who worked overtime time and a half

Termination For Default
A contractor's failure to comply with the material terms of the SCA can result in a termination of the contract for default. If a default termination occurs, the Government is entitled its additional costs to complete the contract.
Steven Jawitz, ASBCA No. 39973, 86-1 BCA 18,564; 29 C.F.R. §4.190(a)

Individual Liability
“The failure to perform a statutory public duty under the Service Contract Act is not only a corporate liability but also the personal liability of each officer charged by reason of his or her corporate office while performing that duty.”
29 CFR §4.187(e)(2)

Individual Liability
Individual liability has been imposed on:
•Corporate officers who are responsible for the control of the day-to-day operations and management policies of a violator company
•All culpable persons exercising control, supervision, or management over contract performance and employment conditions
-individuals who handle payroll records
-individuals who act in an official capacity in handling complaints about services and wages

Rights Of Employees
•Employees have no private right of action to enforce the SCA
•Any employee, labor organization, or other interested person may report violations to the DOL Wage and Hour Division
•The DOL treats such complaints as confidential and will protect the identity of the persons making them

Qui Tam Law Suits?
The U.S. Court of Appeals for the Sixth Circuit has affirmed a ruling that a contractor was liable under the FCA for failing to pay the required minimum wage for electrical work on a subcontract.
U.S. ex rel. Bran Wall v. Circle C Construction LLC, No. 10-5645 (6th Cir. Oct. 1, 2012)

Concluding Thought
“[T]he process has become so complicated that it is sometimes beyond the capability of the average contract specialist to meet the needs of his or her organization….”
OPM Study Of Procurement Work Force
6 N&CR ¶ 54

Executive Order 13658
On October 1, 2014 the DOL implemented EO13658 raising the minimum wage for workers on federal construction and services contracts to $10.10.

SCA Report, GAO-06-07
Priority of $ Withheld
The money withheld for underpaid employees has priority over:
•IRS levy for unpaid taxes
•Recovery of reprocurement costs by the contracting agency
•Any claim by the trustee in bankruptcy
•Any claim by an assignee of the contractor 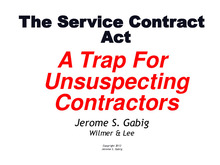