Pearls Of Wisdom On Government Contracting From The Sages

Sage Quotes
“Defense Acquisition represents the largest and, in our judgment, the most important business enterprise in the world.”
Packard Commission Final Report (1986) at p. 41

Sage Quotes - Themes
I.Good Stewards
II.Integrity of Procurement Process
III.Checks & Balances On Procurement Officials
IV.When The Government Contracts, Is It Like Anybody Else?
V.Should Government and Industry Be Partners?
VI.Acquisition Reform

“Public money ought to be touched with the most scrupulous conscientiousness of honor. It is not the produce of riches only, but of the hard earnings of labor and poverty. It is drawn even from the bitterness of want and misery. Not a beggar passes, or perishes in the streets, whose mite is not in that mass.”
Thomas Paine (1737-1809)

“Oh, it is all right now to say we bought too much vinegar and too many chisels, but we saved the civilization of the world. Damn it all, the business of an Army is to win the war, not to quibble around with a lot of cheap buying. Hell and Maria, we weren‟t trying to keep a set of books, we were trying to win a war.”

“The public's interest is clearly served when suppliers engage in fair and robust competition for government contracts. Healthy competition ensures that the costs to the taxpayer will be minimized.”
SAI Indust v. U.S., 60 Fed. Cl. 731 (2004)

“Competition, like democracy is not an end but a means to an end. In particular, competition is expected to lead logically to increases in the quality and decreases in the price of the product one seeks to obtain”
Arch Chemical v. U.S., 54 Fed. Cl. 389

Multiple Award, IDIQ Contracts
“Congress has expressed concern that indiscriminate use of such contracts with a single company for broad categories of ill-defined services can diminish competition and waste taxpayer dollars.”
Multiple Award Contracts At Six Federal Agencies, GAO/NSIAD-98-215 (1998)

II. Integrity Of The Procurement Process

Public confidence in the integrity of the public procurement system … requires that those who work for the government refrain from the appearance of impropriety to the greatest extent possible…”
-Express One Intern v. Postal Service 814 F.Supp. 93 (D.D.C. 1992)

“Five ANC parent corporations have brought in $2 billion or more in contracts since 2000, with Anchorage-based Chugach Alaska Corp., leading the way with $4.5 billion.”
Senator McCaskill

"We've seen that a very small portion of these companies' profits are reaching native Alaskans, so it's time to acknowledge the fact that this program is not effective for either native Alaskans or taxpayers."
Senator McCaskill

“Congressman Manzullo questioned whether agencies are interested in best value in contracts awarded to Alaska Native corporations, quoting a GAO finding that agencies use the no-bid option as a "quick, easy and legal" means of awarding large contracts while at the same time getting credit toward meeting their small business goals. The more than four-fold increase in the value of contracts awarded to Alaska Native corporations between 2000 and 2004 partially reflects laziness on the part of agency contracting officers.”
http://www.govexec.com/dailyfed/0606/062106m1.htm

Efficiency v. Fairness
“There is a constant tension between the desire for a more efficient procurement system and one that promotes equity and accountability.”
William Woods, Ass’t GC, GAO

Checks & Balances - Rules
“If you don't trust Government officials, any system giving them substantial discretion seems unfair. However, the current system doesn't solve this problem. It merely creates a formalistic process in an attempt to provide the appearance of fairness. Our proposed system tries to get rid of the formalism and let Government officials do their job in a businesslike way.”
6 No. 1 Nash & Cibinic Rep. ¶ 1

Checks & Balances - Reviewers
“There is no doubt that we need fewer people in acquisition, but it needs to be fewer reviewers, advocates, inspectors and people who like to be briefed”
James Woolsey Former Under Secretary of Navy Packard Commission Member

Checks & Balances - Lawyers
“Lawyers are not business people. Their input to any equation is always precaution, usually negative and always protective of those they represent. By training, they advise against actions, because actions, or acts, can bring about lawsuits. Generally speaking, no action is always a safe bet.”
Armed Forces Journal (January 1989)

Checks & Balances - Protests
“The court's primary purpose in allowing protestors standing to challenge the government's procurement process is not to vindicate individual entitlement rights to government business. Rather, the court's objective is to advance the public interest by ensuring that the government obtains the most advantageous contracts by complying with applicable regulations and treating all bidders and offerors without discrimination.”
Grumman Data Systems Corp. v. U.S. 28 Fed. Cl. (1993)

Checks & Balances – The Con
“We sympathize with both contractor and Government personnel involved with procurement. They have demanding tasks and are often presented with seemingly unsolvable problems. Their actions are open to “second guessing” and are often misunderstood and criticized by an unappreciative public. Government officials are likely to be damned if they do and damned if they don't. Thus, they should call the shots as they see them and use their best judgment. When Government officials contrive their conduct to avoid criticism, a “do nothing” attitude results and this, itself, brings on criticism.”
6 No. 8 Nash & Cibinic Rep. ¶ 50

Checks & Balances - Paralysis
“The fastest way to succeed in Washington is to avoid making decisions. That way, you do nothing that anybody can criticize.”
Arming America: How The U.S. Buys Weapons (1974) p. 84

Checks & Balances - FOIA
“Sunlight is said to be the best of disinfectants.”
Justice Brandeis Harper’s Weekly 1913

IV. When The Government Contracts, Is It Like Anybody Else?

Like Everybody Else?
“When the United States enters into contract relations, its rights and duties therein are governed generally by the law applicable to contracts between private individuals.”
Lynch v. U.S., 292 U.S. 571 (1934)

Like Everybody Else?
“Like private individuals and businesses, the Government enjoys the unrestricted power to produce its own supplies, to determine those with whom it will deal, and to fix the terms and conditions upon which it make needed purchases.”
Perkins v. Lukens Steel Company , 310 U.S. 113

Like Everybody Else?
“Generally, in respect to all the commercial business of the government, if an officer specially charged with the performance of any duty, and authorized to represent the government in that behalf, neglects that duty, and loss ensues, the government must bear the consequences of his neglect.”
Cooke v. U.S., 91 U.S. 389 (1875)

Like Everybody Else?
“O, it is excellent to have a giant’s strength, but it is tyrannous to use it like a giant.”
Shakespeare

Like Everybody Else?
“It is very well to say that those who deal with the Government should turn square corners. But there is no reason why the square corners should constitute a one-way street.”
Federal Crop Insurance Corp. v Merrill, 332 U.S. 380 (1947) (Jackson dissenting)

Like Everybody Else?
“The U.S. has a higher duty than an ordinary adversary. It is the representative of all the people by the will of the people surviving on and expending the people‟s tax money and should be charged with a high standard of conduct in litigation, i.e., find the truth regardless to the consequences to the position of the U.S.”
U.S. v. Choctaw County, 310 F.Supp. 804

V. Should Government and Industry Be Partners?

Government & Industry Partners?
“[C]ontractors are business men, and in the business of bidding on Government contracts they are usually pressed for time and are consciously seeking to underbid a number of competitors. Consequently, they estimate only on those costs which they feel the contract terms will permit the Government to insist upon in the way of performance.”
Blount Bros. Const. Co. v. U. S. 171 Ct.Cl. 478 (1965)

Government & Industry Partners?“The interest of the Government are basically different from those of the contractor. The contractor wants as much profit as he can get, but the Government wants to pay only a fair price. We should not ignore this basic difference. We are partners when it comes to performance and delivery, but are not partners on price. On matters relating to price, we are on opposite sides of the fence, and we should face this frankly.”
Arming America: How The U.S. Buys Weapons (1974) p. 86

1423 Advisory Panel
“Is that it? After more than a year? After all those hearings and public statements? Please forgive me for saying that it seems pretty lightweight to recommend developing yet another “best practices” guide ….” 20 N&CR 53 (2006)

Acquisition Reform
Gabig‟s Correlation
Acquisition reform is the placebo used by every Administration confronted with procurement scandals or seeking to increase spending.

Acquisition Reform
“The most fundamental purpose of competitive bidding is to eliminate or limit the discretion of contracting-making officials in areas that are susceptible to abuses such as fraud, favoritism, improvidence, and extravagance.”
Manta, Inc. v. Braun, 376 N.W. 2nd 466 (1985)


Acquisition Reform
“The creation of an unyielding rulebook, however, is not the solution. The role played by the judgment of purchasing officials cannot be overlooked, and the flexibility should be preserved to utilize purchasing techniques that are appropriate under the circumstances ”
R. Daniell, 1986 Yale Policy Review at 124 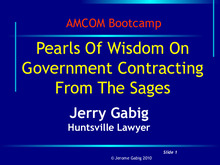