For best value procurements for services, often key personnel are the discriminating factor in the source selection decision. However, proposals that offer key personnel also face a potential peril of being eliminated from the competition. A peril to offering top caliber key personnel is that they are much in demand and may elect to pursue other opportunities. A GAO decision issued last summer highlights this potential peril.

In YWCA of Greater Los Angeles, B-414596.3, July 24, 2017, DOL issued an RFP seeking a contractor to operate the Los Angeles Job Corps center. The RFP designated the center director as a key personnel position. The solicitation required offerors to submit a resume and letter of commitment for the proposed center director. YMCA was the 52-year incumbent on this effort. YMCA submitted a proposal for $98,999,975.

During discussions, the awardee was informed that its proposed center director (candidate A) did not meet the minimum qualifications. The awardee then proposed candidate B. Discussions closed. Later the awardee notified DOL that candidate B had become unavailable and substituted candidate C. YMCA protested that DOL engaged in unequal discussions. Observing that “submission of key personnel resumes after receipt of final proposals constitutes discussions, not clarifications,” the GAO sustained the protest.

A common ground for protest to procurements for services is that the apparent winner has engaged in “bait and switch.” Bait and switch means the offeror submitted names of individuals without expecting those individuals to actually perform the work. Bait and switch implies an intentional misrepresentation. For example, in ACS Government Services, Inc., B-293014, January 20, 2004, a protest was sustained because the awardee misrepresented that three proposed key personnel had agreed to work for the firm, but the record showed that the three individuals never agreed to work for the offeror. Bait and switching can also be grounds for a False Claims Act violation. See U.S. ex rel American Systems Consulting v. ManTech Advanced Systems Int'l, 600 Fed. Appx. 969 (6th Cir. 2015).
Succinctly put, the peril consists of vendors who, after submitting their proposals, learn that a proposed key person is no longer available to perform the work. This peril is more likely to occur when an agency unreasonably prolongs awarding the contract. In those situations, the vendor has a duty to notify the contracting officer. The reason is that without the proposed key person the offer may either not be eligible for award or may no longer represent the best value to the government. From the government’s perspective, the integrity of the procurement system is at stake. Withholding such information is likely to be regarded by the government as a violation of FAR § 3.1002(a) which states “Government contractors must conduct themselves with the highest degree of integrity and honesty.” Hence, the painful reality of the contractor’s peril is that if the contracting officer is unwilling to re-open discussions, the offeror is probably ineligible for award. One technique that might protect an offeror is to include in the initial proposal resumes of alternate key personnel.

If, after contract award, the offeror learns for the first time of the unavailability of a proposed key personnel, the peril greatly diminishes (although there is a possible risk of being terminated for failure to comply with the contract). Post award, the GAO regards the unavailability of key personnel to be a matter of contract administration. In Development Alternatives, Inc., B-217010, February 12, 1985, the awardee submitted the names of key personnel in good faith and with the consent of the named persons. A competitor objected to the award because one of the key persons had informed the awardee just after the contract was signed that she had decided to stay with her present employer. Another proposed key person, after contract award, imposed new conditions of employment on the awardee which the awardee deeded unacceptable. The GAO denied the protest.

In summary, proposing key personnel can be fraught with peril. If a vendor learns prior to contract award that its proposed key personnel will not be available to perform the work, the downside can be worse than merely not being eligible for award. If no disclosure is made and the matter is brought to the government’s attention such as through a protest, it is unlikely the contractor will retain the contract. Moreover, the vendor’s reputation for honesty is likely to be imputed which can have dire consequences. Worst case, albeit rare, the matter could result in a termination for default, a False Claims Act accusation, or possible suspension and/or debarment. Stated differently, when an offeror learns prior to award that a proposed key person is no longer available, it would be wise to follow an admonishment of the Supreme Court (i.e., “Men must turn square corners when they deal with the government”) and disclose the unavailability to the contracting officer. 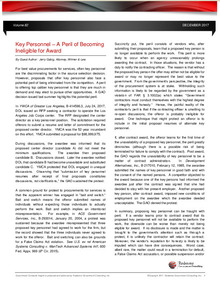 Download "Key Personnel -- A Peril To Being Eligible for Award.pdf"