Is The Government Taking Too Long Responding To An REA? by Jerry Gabig, Attorney, Wilmer & Lee


Although the term “equitable adjustment” appears in various places in the Federal Acquisition Regulation (FAR), the term is never defined. Generally, an REA is a request under the Changes clause requesting the Contracting Officer to negotiate an increase in price for some event that has occurred during contract performance that was not included in the original contract price. There are no firm deadlines on a Contracting Officer to respond to an REA.


Other noteworthy aspects of an REA include: the cost of preparing an REA and negotiating the equitable adjustment are typically allowable;1 the contractor is not entitled to interest for the period of time that the REA is pending; and DOD requires a certification for REA that exceed the simplified acquisition threshold.2


If an agency procrastinates an unreasonable amount of time in processing an REA, the contractor is entitled to convert the REA into a claim. The following is the definition of a “claim” in the FAR:

“Claim” means a written demand or written assertion by one of the contracting parties seeking, as a matter of right, the payment of money in a sum certain, the adjustment or interpretation of contract terms, or other relief arising under or relating to the contract. However, a written demand or written assertion by the contractor seeking the payment of money exceeding $100,000 is not a claim under 41 U. S. C. chapter 71, Contract Disputes, until certified as required by the statute. A voucher, invoice, or other routine request for payment that is not in dispute when submitted is not a claim. The submission may be converted to a claim, by written notice to the contracting officer as provided in 33.206(a), if it is disputed either as to liability or amount or is not acted upon in a reasonable time.

FAR § 2.101 (emphasis added). Notice the bolded language above, which shows that a routine request for an equitable adjustment can become a claim if “not acted upon in a reasonable time.”


In setting an issuance date beyond 60 days, the FAR requires the date be: within a reasonable time, taking into account --

(1) The size and complexity of the claim;
(2) The adequacy of the contractor’s supporting data; and
(3) Any other relevant factors.


If, within 60 days of receiving the claim, the Contracting Officer ignores his or her duty under FAR § 33.211 to identify the date in which he or she will issue a final decision, the claim is deemed denied. Stated differently, after receiving a claim that seeks a final decision, if the Contracting Officer has not notified the contractor within 60 days of a specific date by which the final decision will be issued, the contractor is permitted to appeal to either a Board of Contract Appeals or the Court of Federal Claims.


In Aetna Government Health Plans, ASBCA No. 60207, 16-1 BCA 36247 (2016), Aetna filed a claim that requested a final decision. The Contracting Officer failed to give notification within 60 days. The Contracting Officer responded that the Government needed additional documentation to review the claim and would issue a final decision within 90 days after receipt of such documentation.


Without providing the requested documentation, Aetna appealed to the Armed Services Board of Contact Appeals (ASBCA) on a “deemed denial” basis. The Government moved to dismiss since there was no Contracting Officer final decision. The Board held that the failure of the Contracting Officer, within 60 days of receiving the claim with a request for a final decision, to commit to a specific date constituted a deemed denial of the claim. 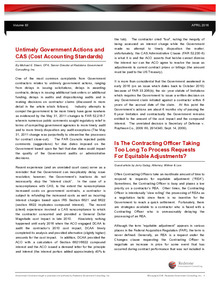 Download "Is The Government Taking Too Long Responding To An REA.pdf"