“The most frequently litigated issue in government contracting is probably the correct interpretation of contract language.”

Patent Ambiguity - Waiver
The distinction between a latent ambiguity and a patent ambiguity is “critical for the purpose of waiver, since ‘a party who has the opportunity to object to the terms of a government solicitation containing a patent error and fails to do so prior to the close of the bidding process waives its ability to raise the same objection afterwards.’”  Blue & Gold Fleet, L.P. v. United States, 492 F.3d at 1315). 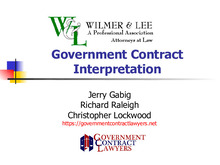