CRISIS PLANNING: When Your Company Is In The Government’s “Crosshairs”

Outline
I. CEO’s Day Of Infamy
II.  Sea Change in S&D
III. Crisis Planning to Minimize Risk of Potential S&D
A CEO’s Day Of Infamy
The processes that the company puts into place long before the Government’s ire often determines whether the
company is allowed to continue to do business with the Federal government.

Disgruntled Employee Example #2
-Successful Huntsville 8(a) Company
-Largest contract was a subcontract with a top five government contractor
-Disgruntled employee claimed 8(a) had submitted false claims
-8(a) retained a retired SES attorney to conduct investigation
-Because of excellent “damage control,” no adverse impact

If It Can Happen To Boeing....

Bad Judgment Example #2
-In 2002, Boeing's CFO offered a job to Darleen Druyun, the Air Force chief acquisition official
-For a reduced sentence, Druyun admitted that she favored Boeing on multiple contracts because of favors granted by Boeing.
-Boeing’s CEO was forced to resign
-Contracts awarded to Boeing by Druyun were successfully protested
-The Air Force’s problems in awarded its tanker contract were largely attributable to the scandal

“I also went back and counted the number of vice presidents who have been separated from the company for ethics violations over the last few years. The total is 15.”
Boeing General Counsel (2006)
Bad Judgment Example #3 (Local)
-Successful Huntsville large business
-Hires a “hard charging” retired officer to pursue approximately $25M contract
-Selected for award
-Disqualified because employee repeated contacted SSA and SSAC members
-Because of excellent “damage control,” no other adverse action against company
Employee Ignorance

Ignorance Example #2
-In 1995, Coast Janitorial Service was awarded a contract at Redstone Arsenal for $19,128,277
-Coast’s Project Manager, “to keep overhead low,” did not pay employees who worked overtime time and a half
-Instead, Coast credited employee with “comp time” which was paid at regular hourly rates.
-DOL found SCA violation involving two employees at an amount of $6,596.
-Coastal responsible for “willful and deliberate” violations of supervisor
-Coast debarred for 3 years
-President, Mr. Grimes, debarred
-VP, Mr. Scott, debarred
Affiliation

Affiliation Example #1
-Taos acquired by Agility Defense and Government Services Inc.
-Agility owned by DGS, a Dutch Company
-PWC owned by PWC, a Kuwait Company
-A Special Security Agreement prohibited DGS for exercising control of Agility
-In 2009 PWC indicted for defrauding US Government of $6B
-Agility suspended as an affiliate of PWC
-Suspension Official rejected a management buy-out where officers in Agility would acquire 60% of company
-After 32 months, Judge Lynwood Smith gave summary judgment to lift suspension
Misunderstanding

A. Prevent
B. Preparation
C. Reaction

A. Prevent
-The best prevention is an exceptional compliance program

-Recommendation: Any corporation that derives significant revenue from government contracts should have a Board of Directors Compliance Committee (not unlike an Audit Committee or a Compensation Committee)

1. KBR “required employees to have training in professional responsibility and to sign agreements signifying that they would comply with KBR policies, which prohibited the acceptance of kickbacks.”

2. At trial, KBR “introduced, Mr. Hall’s signature page, whereby Mr. Hall had acknowledged that he had read, and would abide by, Halliburton’s Company Code of Business Conduct.”

Concluding Thought
-When you do business with the Sovereign, you risk incurring the Sovereign’s wrath.
-Plan like any other occupational hazard: 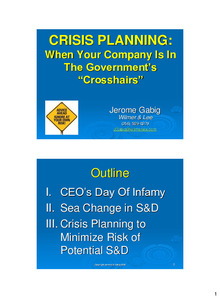 Download "Crisis Planning Should You Happen Into The Government's Crosshairs .pdf"